One of the many exciting and scientifically interesting aspects of tepui research is the surveying of unexplored areas of the unique Pantepui region. In an effort to produce long term horizontal surveys of Auyan Tepui after our 2014 expedition, Biokryptos created Tepui Watch, so that we can explore this unique ecosystem systematically with camera traps in three phases. Phase 1 is talus slope monitoring, Phase 2 is trail monitoring, and Phase 3 is monitoring unexplored regions on the tepui summit. In January, 2016, Biokryptos team member and lead investigator Arturo Berti started work on the most exciting and technically challenging part of Tepui Watch, Phase 3. While we are entering Phase 3, we are still going to engage in Phase 2 activities in and around Lecho and Dragon for the next year, as we explore more of the southern portion of Auyan. The goal is to move the camera traps gradually from that area to the east, and monitor the forests and swamp lands of Auyan which may be topographical connections to the lowlands.

The initial survey area for Phase 3 of Tepui Watch is the lagoon and stream system located approximately 2 km west of Angel Falls. The lagoons were host to a series of expeditions by the Venezuelan environmental non-profit Terramar in the late 1980s and a target oriented follow up expedition in 1990. The expeditions were recorded in detail by photographer and naturalist Uwe George for National Geographic, GEO magazine, and in the book “Inslen in der Zeit” (1988). During expeditionary work in the 1980s, Terramar expedition members recorded sighting of big cats, tapir foot prints, and large tegu-like lizards on the summit of Auyan. Terramar members also photographed the (now determined to be ubiquitous) coati Nasua nasua vittata on the summit of Auyan. From my limited correspondence with Terramar members, I learned that the lagoon ecosystem and surrounding forests of the Aonda region of Auyan were host to a number of interesting faunal sightings.  However, in the mid-1990s expeditionary work on Auyan began to slow, and this area was left unsurveyed. In an effort to verify observations made by Terramar during the late 1980s and early 1990s, Biokryptos decided to begin a camera trap survey of the lagoon area and surrounding forest in the Aonda region of Auyan. This area was selected for the following reasons:


Accessing this area is by far the most complex undertaking of Biokryptos thus far. Our previous expeditions to camps on the summit take about 4 days’ round trip, going up the southern entrance through Libertador into the forests around Lecho and Dragon. The trip to the northern lagoon and Bosque de Sima Aonda takes around 15 days’ round trip, moving through four distinct types of tepui ecosystems. The route deviates from Camino Salto by two kilometers in total; once off Camino Salto all trekking is through dense forests and swampland. The forest cover is in fact so extreme that it is nearly impossible to get GPS signal once in the forest.
An overflight was conducted by Biokryptos board member Vittorio Assandria to scout this area before we sent our team to the lagoons. From this footage, we were able to identify topographic features not readily identifiable from the satellite photos of the area.

Observations at the lagoon

The rivers which feed the lagoon form a shallow densely forested valley. Immediately to the west of the lagoon there is a heavily forested hill, which on satellite looks deceptively like a small clearing. An area in the west of the lagoon which was assumed to be an algae mat or vegetation is in fact a sandy beach with intermittent vegetation.  The permanence of this area is unusual; it does not appear to have changed in any significant way since the late 1980s, when it was filmed and photographed by Terramar.

No animals were observed at the lagoon during initial exploration by the Biokryptos team. However, three traces of animal activity were observed: 1) a large animal was heard moving off in the distance, some 100 plus meters away 2) fruits resembling figs were observed on the forest floor recently eaten 3) scratch marks indicative of a large cat were recorded within a few dozen meters of the lagoon.  While the large animal was not unidentified, Arturo and company do not believe it was a jaguar or mountain lion, but a completely different animal, possibly a large herbivore. The markings recorded on the tree are from a large cat according to Arturo, who has seen similar markings at lower elevations at Guayaraca at 1000 meters. A big cat has also been recently reported (March 2016) around Guayaraca on the escarpments of Auyan Tepui. There have been past observations of big cats on tepui summits before, notably from Dr. Armando Michelangeli of Terramar during the 1988 or 89 expedition to Auyan Tepui. However this observation was made in a cave on the western portion of Auyan across the Canyon del Diablo, far from the lagoon area in our survey (George, Uwe. National Geographic, May 1989).  As of the writing of this blog, this photograph from Arturo Berti is the first photographic evidence of a large cat on a tepui summit, and the first photographic verification of Dr. Michelangelis observations of tepui summit big cats.

Results from Lecho and Dragon area: first record of Procyon cancrivorus on a Tepui summit.

While placing the camera traps in their new location, the team pulled the data from the traps at Lecho and Dragon. Previously, we had a significant data loss from this area, as the SD cards were stolen en route to processing, and only a few images uploaded beforehand were saved. This time, we recorded images of two coatis, anteaters, squirrels, rodents, and a new biokryptos specimen, the crab eating raccoon Procyon cancrivorus. This is the first time a crab eating raccoon has been recorded on a tepui summit.  Physically, it resembles a North American raccoon with elongated legs and a svelter appearance; its pelage is grey with occasional yellow markings around the back of the neck, with a ringed tail. It is a widespread mesopredator, IUCN Redlisted Least Concern (LC) due to its wide distribution across Central and South America. Although its preferred habitat is coastal and riparian ecosystems at lower elevations, it has been observed in the Llanos and in dense forest. This species is sympatric with coatis (Nasua nasua), and has been observed being frugivorous, though it mostly hunts small animals near streams. The encounter is unusual in that Procyon cancrivorus is normally found at lower elevations, and is more selective of its environment, preferring lowland forestsand coastal areas. Its relevance to tepui ecology relates directly to its presence there as a potential seed disperser, and the fact that it is at an altitude uncharacteristically high for its known distribution. Its diet is very similar to that of Cerdocyon thous thous, and the two are sympatric. Its presence at Lecho represents additional circumstantial evidence supporting Laimes 1974 fox observations on the summit of Auyan. 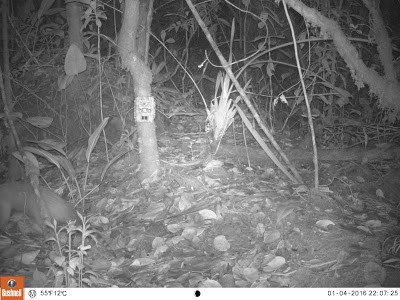 Tepui Watch has entered phase three with some exciting new observations regarding the faunal composition of Auyan Tepui, both in terms of the camera trap data, and from observations and photographs taken deep in unsurveyed parts of the plateau. To summarize, the medium sized and large vertebrate fauna of central Auyan as at least composed of: 1) the anteater Tamandua tetradactyla, 2) the coati Nasua nasua vittata. 3) the Tayra Eira barbara, 4) the crab eating raccoon Procyon cancrivorus  5) the opossum Didelphis imperfecta, 6) two species of squirrel, Sciurus aestuans and Sciurus flammifer. From the 2014 Auyan Tepui Expedition, we have photographs and observations of the Paca Cuniculus paca from footprints found near the river at Campo Dragon. Thus far, this riparian ecosystem and the forests which border it contain the highest diversity of medium sized mammals recorded on any tepui summit that I am aware of.


As I wrote in a previous blog, the presence of this high a diversity of medium sized mammals indicates that a topographic connection between the summit and the surrounding highlands must exist, and this connection allows lowland mammals into the summit.  The observations of big cats on two separate portion of the tepui, separated by 26 years, indicates that large mammals are also able to range deep into remote parts Auyan.  What is enticing these animals onto the summit is unknwown at this time, but the evidence is mounting that 1) Auyan Tepui maintains a greater and more diverse ecological richness than previously thought 2) More medium and large bodied animals are present on the summit than officially documented. 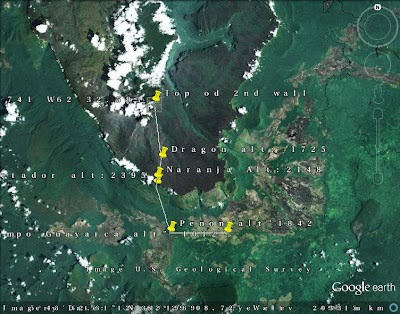 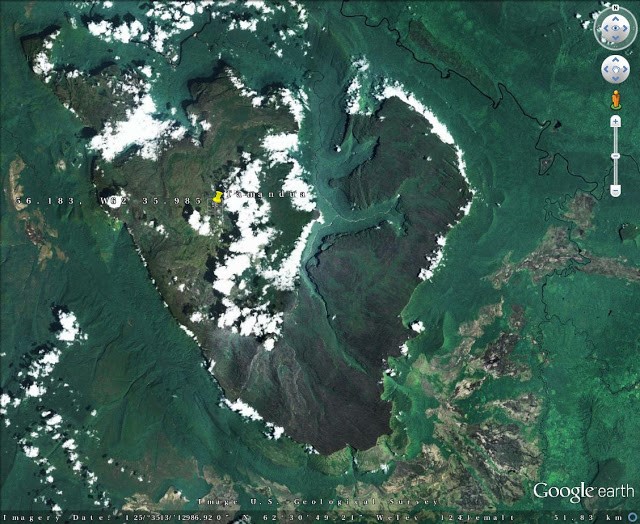 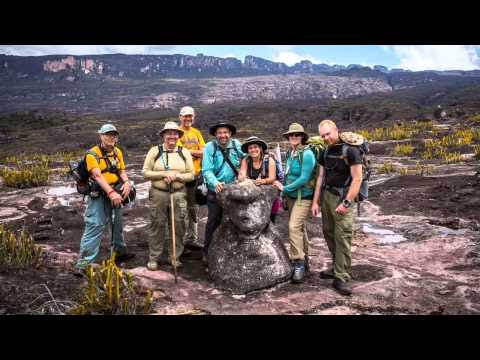